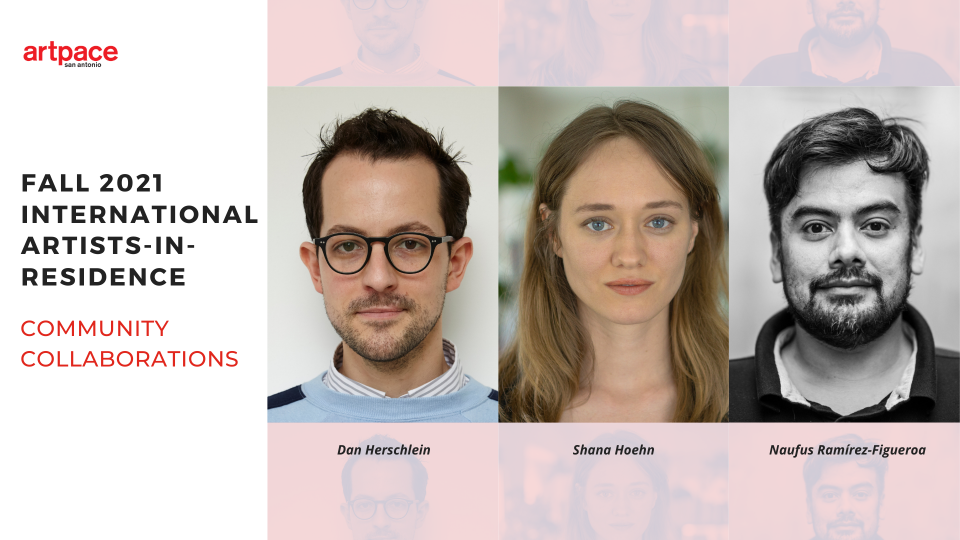 Free, open to the public

Shana Hoehn and Dan Herschlein invite visitors for conversation and a behind the scenes look into their studios mid-way through their residencies and Naufus Ramírez-Figueroa will screen his video work Lugar de Consuelo. Studios will open at 6pm with Ramírez-Figueroa’s video beginning at 7pm, followed by a short Q&A.

Special thanks to our supporters The Linda Pace Foundation and the John L Santikos Charitable Foundation of the San Antonio Area Foundation.

Shana Hoehn is an artist working with sculpture, video, and photo-adjacent processes. Her research and artwork are a personal and historical inquiry into the aesthetics that allegorize the femme form. Conjuring imagery from her girlhood psyche and the female body in car culture, the medical imagination, pop-culture, and military-industrial objects, she disorganizes these sites of control and fantasy in such a way that retires their previous symbolic performance.

Naufus Ramírez-Figueroa lives and works in Guatemala City. He holds a BFA from Emily Carr University, Vancouver, an MFA from the School of the Art Institute of Chicago, and was a research fellow at Jan van Eyck Academy in Maastricht in 2013. Using performance, sound, drawing and sculpture, Ramírez-Figueroa’s work conjures live and sculptural representations that explore themes of loss, displacement and cultural resistance. The Guatemalan Civil War (1960–1996) is a recurring subject in his work, which although often softened by an absurd and humorous approach, fails to conceal the force of history that precedes it.

Ramírez-Figueroa filmed this work at the Popular University (UP) in Guatemala City. It is inspired by a complaint against the Government presented in the UP in 1975, which in turn was vaguely inspired by the play El corazón del espantapájaros, written by the Guatemalan playwright Hugo Carrillo in 1962. During the Civil War, the production In 1975, was revolutionary in its purpose, for which it aroused a violent reaction of censorship, with attacks on actors and theaters, ending in a dangerous fire. Perhaps due to this trauma, memories of the 1975 performance are hazy. Ramírez-Figueroa’s work uses a new script created with the poet Wingston González, in which the original characters of the work exist in a fascist context in which they are both villains and victims.