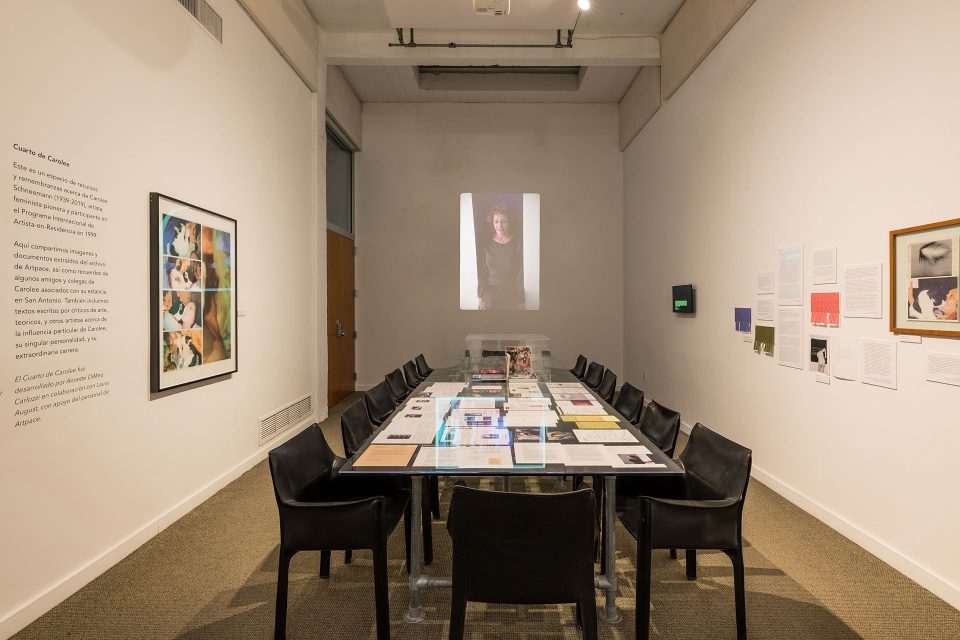 Saving all the Bits that Tell the Story: Making Carolee’s Room

Hudson Showroom | Comments Off on Saving all the Bits that Tell the Story: Making Carolee’s Room
Map Unavailable

Saving all the Bits that Tell the Story: Making Carolee’s Room, a program in association with Artpace’s current Hudson Showroom exhibition, After Carolee: Tender and Fierce, now on view until July 18, 2021.

Join guest curator Annette DiMeo Carlozzi, Carolee’s Room collaborator/independent critic & curator Laura August, and Artpace’s own Archives & Programs Associate Chris Mills, in a discussion of Carolee’s Room, a dedicated space in the exhibition that brings together archival documents, images, and texts from, as well as invited testimonies to, Carolee Schneemann’s 1999 residency at Artpace.

Independent curator Annette DiMeo Carlozzi has built an expansive practice across the US as a curator of modern and contemporary art, focusing on ideas and experiences, artists, and audiences. Raised in Boston and trained at the Walker Art Center, she has served in a variety of foundational roles: as the first curator at Laguna Gloria Art Museum (now The Contemporary Austin); executive director of the Aspen Art Museum and the Contemporary Arts Center, New Orleans; Visual Arts Producer for the 1996 Olympic Games in Atlanta; and in multiple positions—ranging from founding modern and contemporary curator to Deputy Director for Art and Programs to Curator at Large—at the Blanton Museum of Art, University of Texas at Austin. Committed to expanding the canon, she has created notable exhibitions (Luis Jiménez, Paul Chan, Michael Smith, Deborah Hay, Negotiating Small Truths, America/Americas, Desire), produced important commissions (Nancy Holt, Siah Armajani, Betye Saar, Vito Acconci, Byron Kim, Teresita Fernández), and acquired major works by a wide range of international artists. Carlozzi has had a long relationship with Artpace, having served as an early advisor, artist interviewer, and program panelist, member of the 1998 artist selection panel and 2001–03 Board of Visitors. In 2015 she curated Immersed from Linda Pace’s art collection, now called Ruby City.

Laura August is a writer and curator whose work is informed by border-crossing aesthetics and politics, poetry and translation, and the experience of landscape. Since 2015, she has worked between Houston and Guatemala City, where she founded a domestic project space named Yvonne. Her recent exhibitions include citysinging at Lawndale, To look at the sea is to become what one is at Radiator Arts in New York, Stone’s Throw at The Anderson in Richmond, Virginia, and To Weave Blue at the Fogelman Galleries in Memphis, which was the first exhibition in the US to center contemporary art and conceptual practices by Mayan artists. She is a recipient of the Creative Capital | Andy Warhol Foundation Arts Writers Grant, and she completed the Core Program at the MFAH in Houston in 2018. In 2018, she also co-curated Guatemala’s Paiz Biennial, with Gerardo Mosquera. She holds a PhD in Art History from The University of Texas at Austin, where she first worked with Annette Carlozzi in the Department of American and Contemporary art at the Blanton Museum in the early 2000s. In 2021, she is an inaugural recipient of a Mellon Arts and Practitioner Fellowship from the Center for the Study of Race, Indigeneity, and Transnational Migration at Yale University.

This exhibition has been made possible through the generous support of Sarah E. Harte and John S. Gutzler and the Alice Kleberg Reynolds Foundation. Artpace would also like to thank the City of San Antonio Department of Arts & Culture, the Ruth Lang Charitable Fund and the John L. Santikos Charitable Foundation of the San Antonio Area Foundation, and the Texas Commission on the Arts for their ongoing support of Artpace’s exhibitions and programs.